The 7th CPC designing a pay matrix which is simple, transparent, predictable and easily comprehensible. 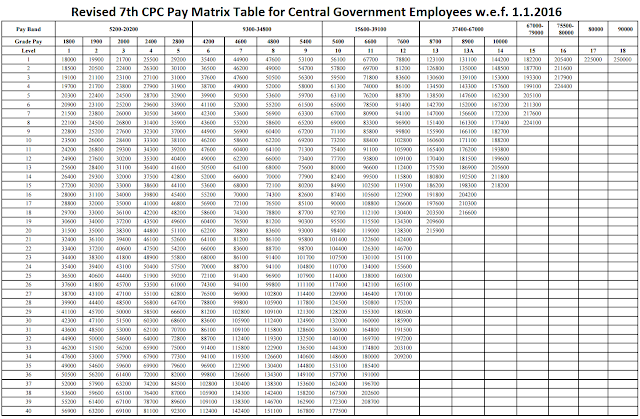 Hello Sir ,
As My father expired in September1999 , his family pension fixed to my mother is Rs3850 as family pension coz the last basic pay of my father in 1999 is Rs 7700/-
now my mother getting gross pension Rs20,000/-so what can be the increase when 7th pay commission will be implemented .
Regards
Navdeep singh

7th CPC has recommended a multiplication index (factor) of 2.57 for computation of the new pay. What is the significance/use of various Index nos. given in the Matrix Table of 7th CPC ?

When the present chart is not finding the present basic pay drawn,how a New Pay due can be treated as correct.Loss in the next 10 years is likely to be recurring in nature.

Some of the comments have great value.The best possible way is to seek for the assistance from !!! Appointing Authorities!!! for determining new pay/new pension due...

THIS IS MY REPEATED POST. IT WAS STATED IN THE 7CPC REPORT THAT THERE WILL BE HIKE OF 24% FOR THE PENSIONERS BUT IN SOME CASES (INCLUDING MY CASE) IT IS ONLY HIKE OF 17.30% OR SOME MORE CASES ARE WHERE IS EVEN LESS HIKE. I THINK THIS 24% IS THE TOTAL AND OVERALL HIKE IN PENSION. GOVT WHILE ISSUING THE ORDERS SHOULD ENSURE THAT MINIMUM 24% HIKE IS GRANTED FOR EVERY PENSIONER.

Sri. Kale Vasant,
As per option 2, ur new pension would be37856 and for calculation under option 1, u would have to furnish ur scale and the no. of increments drawn in that scale at the time of ur retirement.

Sri.KrishanAvatar,
The increase in pension to the extent of 30-35% occurs in case of pre2006 pensioners mostly on account of the full parity being accepted in the 7CPC, Otherwise, the rise in pension is nominal like others.

Dr.Murthy,
It appears that there is some confusion. The factor 2.57 is for Pensioners only whereas the matrix is for both the employees and the pensioners. While the 2 option for refixation of pension is by mf2.57, the variations in mf in the matrix are due to some moderations introduced by the 7CPC in cases where the 6CPC had not made full justice to those groups.

SriJatinder,
The purpose of the index nos are for indicating the no. of increments drawn on those levels.The meeting point of the particular level and the index no. gives the notional pay applicable to the employees and 60% of the same as pension for the pensioners.

I was appointed as ASM on date. 07-01-1998 in SECR/NGP division in 1200-2040 pay scale .Due to some reason in 2005, I was unfit from ASM category and posted in ministriel staff as O S under Comml deptt . After 16 years service In July 2013 , GP- 4600/- (under MACP) I accepted Own request transfer from Nagpur to Lucknow NE Railway division in 2800/- GP in Mechanical deppartement.
My DOA is 07-01-1998 as ASM, and I have taken my first promotion on 2002 Oct and 1st MACP of 4600/- GP on Nov-2012 and after 8 months later on date 11-7-2013. I came transfer at Lucknow in Own request in (2800/- GP) as Sr, Clerk. in Mechanical (O&F) LJN.
Kindly give me proper circuler if any so i get promotion or atliest (4200/-) GP or MACP benifit because my department telling that you will be not entitled for any benifits and you have already refuse your senourity and came on Own request in (2800/- GP) as Sr, Clerk, under Sr DME/O& F/LJN I have found 2 circulars under MACP rules.
1. As per RBE Circular No. 101 /2009 dated 10-06-2009. :- Recommendation of the Sixth Pay Commission – (MACPS) for Railway Employees. On grant of financial upgradation under the scheme, there shall be no change in the designation, classification or higher status. However, financial and certain benefits which are liked to be pay drawn an employee such as HBA, allotment of Government accommodation shall be permited.

2. As per RBE Circular No.19 /2016 dated 17-02-2016 It is now further clarified that whereven an official in accordance with terms and conditions of transfer on own volition to a lower post, is reverted to the lower post/Grade from the promoted post/Grade before being relived for the new organization/office, such past promotion in the previous organization/office will be ignored for the purpose of MACP Scheme in the new organization/office. Pl. give me the correct rule/circular
Thanks. (R.K.Rawat/ Sr Clerk,DRM office under Sr DME/O&F/LJN) Mo no. 9794832210 (CUG)

Too many queries!Too many calculations! too many clarifications! too many ifs and buts! But nobody has commented about the forthcoming All India Strike on 11 July 2016! We want everything! We want every single paisa benefit but our service should not be affected! Nobody is prepared to sacrifice even a day's salary!
iqbal ahamed

Sir,
I retired as Section Officer in PB 2, GP 4600 on 31-12-2009 . My basic pension fixed at Rs. 12330 w.e.f. 1/1/2010. I have rendered a total service of 39 years 4 months as my initial date of appointment in LDC was 10-8-1970. I was promoted to the post of Assistant w.e.f. 30-6-1984(Now GP 4200 in PB 2) . I was appointed to the post of Section Officer(Gazetted) with effect from 7/2/2000 in Debts Recovery Appellate Tribunal, Ministry of Finance, till my retirement. In case I would have not promoted to the post of Section Officer, my services would have continued in PB 2 GP 4200 for 25 years. As per pay matrix now accepted by Government , my pay in S O Grade with 9 increment comes to Rs.58600. But if my services continued in lower grade of Assistant , my notional pay with 25 increments comes to 74300.. Fifty percent of amount calculated in SO Grade would be Rs.29300 and Assistants Grade Rs. 37150. Now please calculate my pension and also may kindly elaborate as to how pension shall be less if retired in higher grade and more if retired in lower grade in spite of the fact that length service is same. It is pertinent to mention that some weighatage is to be given while fixing pension in the higher grade from which one retired to have parity with the person who retired in lower grade with same length of service. This is a complex situation and person who retired with longer period of service in lower grade and lesser period of service in higher grade must be given option to have their pension fixed in lower grade if financially benefitted.
Thanks.
Durga Prasad Shaw, Section Officer(Retired), DRAT, Ministry of Finance.

Sir I am serving in BSF . I was in 2400 grade pay after 7 years of my service I cleared department exam to 2800 Grady pay on date 02.08.2013.On pay fixation one increment with change of grade pay 2400 to 2800 was given to me . But now after 3 years says that only you can get change of grade pay not one increment becausebecause they says me that I have got only remustrated not got any promotion